Sharp is gearing up for a new mid-range premium smartphone. The device carries the model number Sharp FS8032 and has recently been certified by Taiwan’s certification body NCC. Sharp FS8015 is also certified by Tenaa in the previous month which not only the specs but also the images agree with the certification of the NCC. This indicates that FS8015 and FS8032 are the same devices. The device had previously appeared in GeekBench but with this new NCC certification, it is confirmed the device will be Sharp Aquos S3, the successor to Sharp Aquos S2, which was launched back in August.

The company sent an invitation letter to the Taiwan media for a launch event where it will unveil ” Sharp Aquos S3″ in Taipei on 16 January 2018. 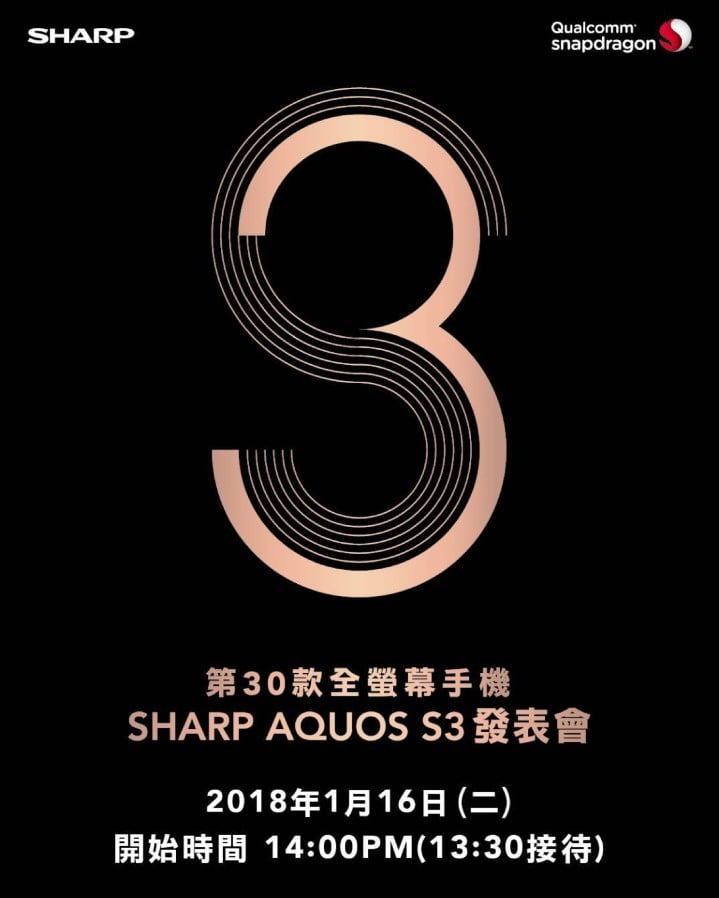 As for the design, the Aquos S3 will be following the Aquos S2’s curved back cover, rear dual-lens design. What’s new is the placement of the fingerprint sensor which will be placed at the rear giving more space in the front. As for the specs, the device will sport a 5.99-inch Full HD+ display and powered by a Qualcomm Snapdragon 630/ 660. There will be two memory variants: 4 GB RAM + 64 GB internal storage and 6 GB RAM + 128 GB internal space.

The Aquos S3 will offer dual camera setup stacked in a vertical arrangement on the rear consisting of 12 MP and 13 MP camera sensors and a 16 MP camera sensor on the front for selfies and video calling. The device will run on Android 8.0 Oreo.

Today, A list of supported terminals published in Google Play Help has been updated, and the Sharp Aquos S3 mini (Small version of SHARP AQUOS S3) carrying a model number Sharp FS8018 has been added.

So we can expect a mini version of the device with model number Sharp FS8018 will be launched alongside the Sharp Aquos S3. Dubbed as Sharp Aquos S3 mini, the device (Sharp FS8018) has previously certified by Chinese Industrial Well-Known Breadth Depth Division, China Mandatory Authentication, Bluetooth SIG Certification, and TENAA.

On the optics department, Sharp Aquos S3 mini will be featuring a 16 MP camera sensor on the rear and a 20 MP camera sensor at the front which makes it a selfie-centric smartphone. It runs on Android 7.1.1 Nougat and is backed by a 2930 mAh battery. Connectivity options include Bluetooth 5.0,  4G VoLTE and more. The device appeared on GeekBench where it scored 961 and 5215 in single-core and multi-core tests respectively.