The smartphone is a entry-class smartphone which is sold by Verizon Wireless, a US mobile operator (MNO)

South Korean manufacturing giant today added another smartphone to its portfolio. The smartphone dubbed as LG Zone 4 is an entry-level smartphone with minimal specs. It is the successor to the LG Zone 3 which was launched way back in January 2016. The smartphone consists of an old regular Plastic material design with huge bezels on the top and bottom. It is available only in Moroccan Blue colour variant.

The LG Zone 4 features a 5 inch LCD with a resolution of HD (1280 x 720 pixels).  Under the hood, it is powered by a 64 bit Qualcomm Snapdragon 425. It is coupled with 2 GB RAM and 64 GB internal storage. There is also an option for expansion of memory by microSD card. 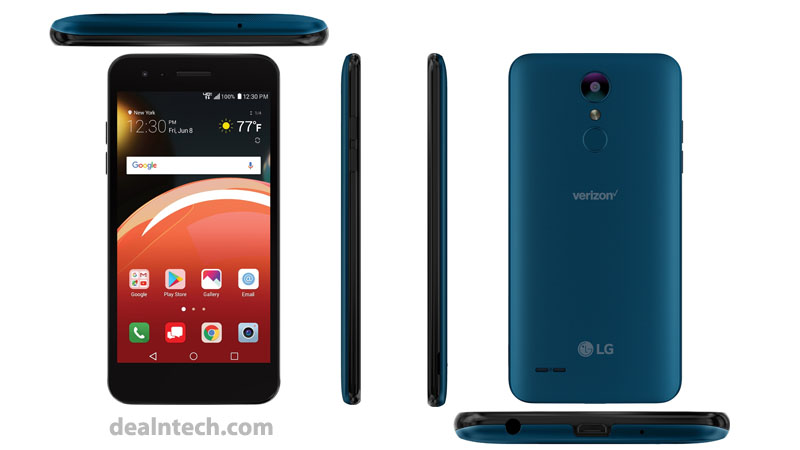 On the optics department, the smartphone comes with an 8 MP CMOS sensor on the rear while featuring a 5 MP CMOS sensor on the front for selfies and video calling. It runs on Android 7.1.2 Nougat and is backed by a 2,500 mAh removable lithium-ion battery. The smartphone also carries a rear fingerprint sensor placed just below the flash. The single speaker is placed at the bottom left corner of the rear of the device. Additional features include HD voice and Wi-Fi calling and a smooth UI.

Connectivity features include 4G LTE, VoLTE, Wi-Fi 802.11 b/g/n (2.4 GHz), Bluetooth 4.2 and more. As previously reported by the tipster Evan Blass this device will drop the ”Optimus” tag its predecessor came with and stuck to the Zone brand. Optimus naming was included from the time the company started to manufacture Android smartphones, but it hasn’t been used on flagships since 2013. As the device will be sold by prepaid  Verizon Wireless, this device will support 4G networks supported only by Verizon. It comes with a price tag of 114.99$ (Rs 7500 approx)