LG’s first 5G smartphone V50 ThinQ comes with a dual screen accessory that adds a 6.2-inch full-HD (2160 x 1080 pixels) OLED display for better gaming and multitasking experience. The price of the LG Dual Screen is set at KRW 219,000 (approximately $190). But LG Electronics said that anyone who purchases the phone by the end of May would get a dual screen accessory at no additional cost. 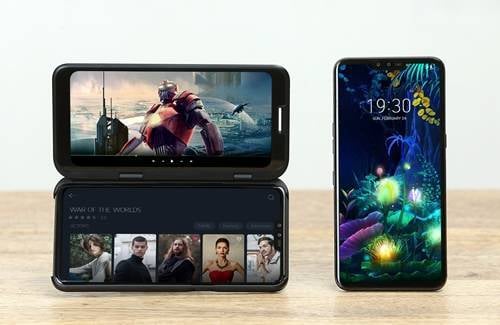 The V50 ThinQ 5G will be released through Korea’s three telecommunications networks SK Telecom, KT Corporation, and LG Uplus (LGU +). The smartphone will also be available on LG Electronics shops and open markets.

Talking about the specifications, V50 ThinQ 5G comes with a 6.4 inch OLED full vision display, a 4000 mAh battery and with Qualcomm’s newest Snapdragon 855 chipset, along with X50 5G modem.

This device uses a single SIM, and the SIM size is Nano SIM.

The phone comes with 6 GB of RAM and 128 GB of internal storage. Additionally, it comes with IP68 dust and waterproofing certificate.

The V50 ThinQ 5G will run on Android 9 Pie. USB Type-C charging port is adapted for this device by LG. Also, it supports wireless charging.