In February 2019,  Xiaomi launched the Mi 9 Series which included 3 smartphones – Mi 9, Mi 9 SE and Mi 9 Transparent Edition. Now the company is going to launch another smartphone for the Mi 9 Series. 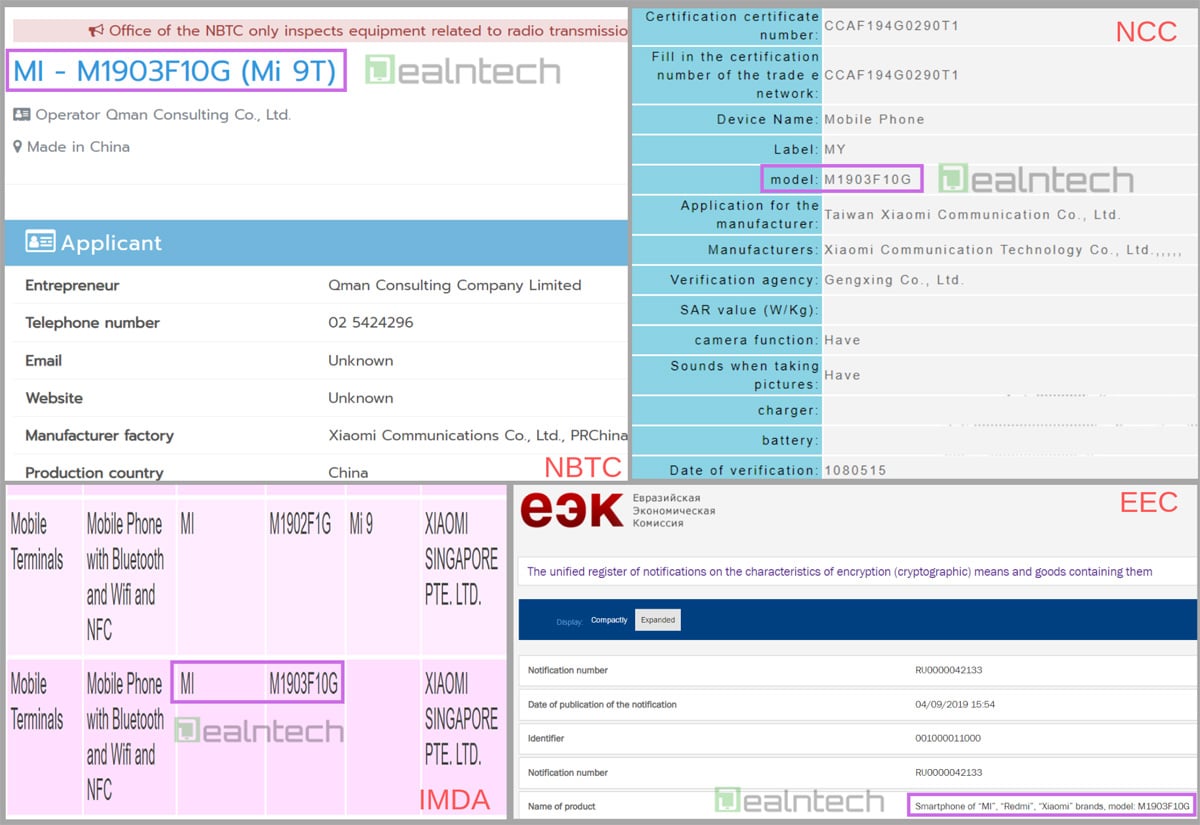 The model number M1903F10G was also listed on the website of the EEC (Eurasian Economic Commission) and IMDA. EEC certification did not reveal anything except Mi, Redmi, Xiaomi branding. The IMDA certification shows M1902F1G (Mi 9), and M1903F10G (Unknown Xiaomi Phone) are listed together. Also, judging from the character sequence, we can say that this Unknown Xiaomi Phone belongs to Mi 9 series.

So, the certifications from different countries hint that the phone will launch in global markets soon. However, there is no official word about this phone until now. Xiaomi is going to launch Redmi K20 Series, but as of now, DealNTech can’t say whether the model number M1903F10G is related to the K20 series or this is a different Xiaomi phone which may be called Poco F2 in India (Poco F1’s model number was M1805E10A). Rumours also suggest that Redmi K20 and K20 pro may arrive globally as Xiaomi Mi 9T and Mi 9T Pro. Time will tell.

Talking about the Mi 9 series, the Xiaomi Mi 9 and Mi 9 Transparent Edition come bearing the Snapdragon 855 SoC whereas Mi 9 SE sports with the Snapdragon 712 chipset. The Transparent Edition is the most expensive of the lot with 12GB RAM and 256GB storage. We expect the upcoming Mi 9T will be the top variant of Mi 9. For key specifications, we will have to wait till Tenaa certification.

Xiaomi never used T naming scheme for Mi Series; however, NBTC listing suggests that the company may use T naming instead of Pro naming. So, we can expect Mi 9T ( or Mi 9 Pro) to arrive as a successor to the Mi 8 Pro.

On the famous Chinese store JD.com, Mi 9 China price has been reduced by 50 Yuan and 100 Yuan for 6GB/128GB variant and 8 GB/128 GB variant respectively. It suggests that the price cut could be Xiaomi way to clear out the sock of the Mi 9 before the launch of the Mi 9T.

However, the price cut did not reflect on Xiaomi official store, including other stores such as Suning, Tmall, etc. So, we don’t know whether its a decision by Xiaomi or just a promotional discount from JD.com.