Huawei has achieved tremendous success this year from becoming the world’s second largest second smartphone brand by infusing a neural networking AI in their chipset. DxOMark, the French imagining firm that rates camera and lenses claimed the camera sensor of Huawei’s Mate 10 Pro is better than iPhone’s and even the Google Pixel 2. That not all Huawei has to offer this year. The company’s new flagship, the Huawei Honor V10 is set to announce at an event in China on November 28. Today we got the first look at the real-life image of the device.

The 5.9 inch 18:9 aspect ratio display looks gorgeous with 2.5 D Curved Glass on the top. The display through looks very reflective and shiny which could be due to the presence of a tempered class. There is a 13 MP camera on the front, and it shatters all the rumours about the dual front camera setup on the front side. Rest assured, there will be a dual camera setup on the rear consisting of 16 MP and 20 MP sensors. 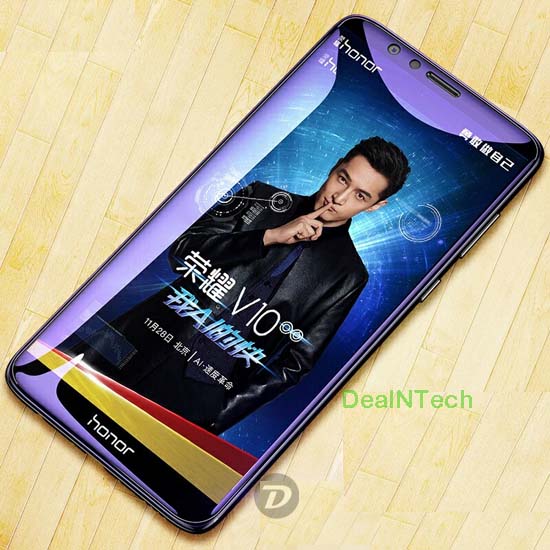 One of the most talking features of this device is its AI capabilities. The device is powered by a Kirin 970 processor; the first smartphone AI computing platform with independent NPU in the world. The company itself is marketing this feature as evident from the leaked images of the invitation a few days back. Also, the device will be one of the first to come with the new Android 8.0 Oreo running behind their own EMUI 8.0.

Also, the fact that it will be priced significantly lesser than the Huawei Mate 10 Pro, will attract many customers who want a slice of the AI tech without burning a hole in their pocket. The device price is supposed to be around 3000 yuan (Rs 30,000 approx). There is only a week left for the announcement, and we are excited to see what Huawei has to offer the world this time.