Reliance Jio, which took the telecom industry by storm has decided to increase its Rs 399 Dhan Dhana Dhan plans to Rs 459 from Thursday, under which the subscribers can avail 1 GB of data per day for 84 days for prepaid users and 3 months for postpaid. The new plans will be available from October 19 to both new and existing Jio customers. The rules are the same. After spending the FUP limit, you can still avail the data at a lower speed, unlimited free voice calls and SMS. All the details are available on the Jio website.

The plans have also been changed for the Rs 149 plan. Reliance has doubled the data limit on this plan. Instead of the 2 GB data users will be getting 4 GB of data. Other details remain unchanged for this plan. As for the Rs 509 plan, users can still enjoy the 2GB of data daily along with the other goodies offered in the previous plans. But the validity has been reduced from 56 days to 49 days for prepaid users. But there is no word for the post-paid offers. 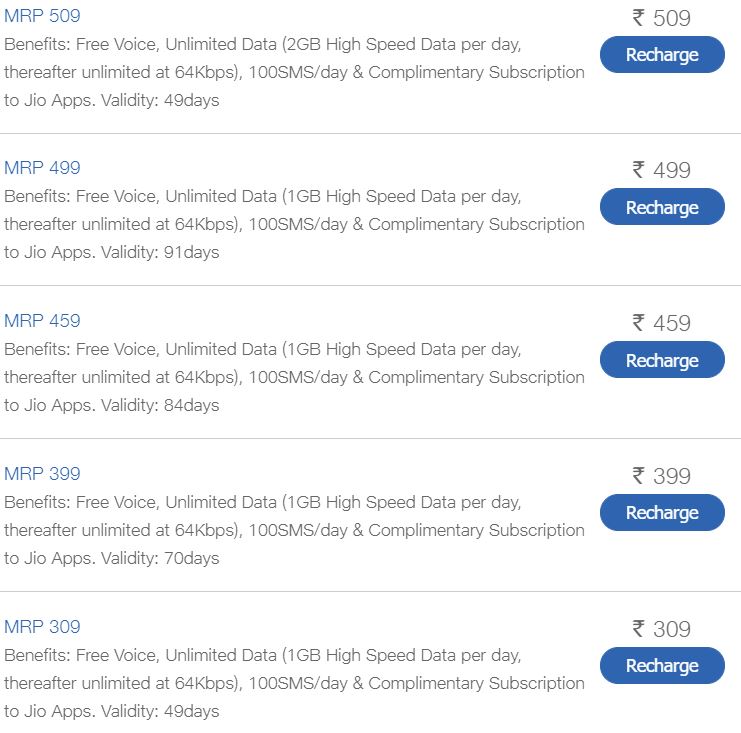 As for the postpaid users, there are two plans of Rs 349 and Rs 399. Rs 349 plan includes two months validity with 20 GB of data while the Rs 399 plan offers 1 GB per day with three months validity, totalling 90 GB for the whole period.

Reliance Jio had also offered complete cash back offer with a recharge of Rs 399 which is available from October 12- October 18. The cash back was offered with eight coupons of Rs 50 each.

Reliance has been hiking the price on its data rates since its inception. With a total of 130 million users on its network, Jio is trying to add more into their network through their new schemes and devices (JioPhone). However, the thing is if they are still giving value for money compared to the other data operators who have been in war with Jio for offering cheap data rates.

Jio Book Laptop: Everything You Need to Know