Leaked Screen Protectors of Redmi Flagship might be Photo-shopped

We have been seeing certain tips and leaks saying there is a new Redmi flagship device. Earlier reports speculated that this new upcoming flagship would be named the Xiaomi Redmi X. However, recently general manager of Redmi brand, Lu Weibing cleared all the rumours and said that the device wouldn’t be called Redmi X. He posted an update on his Weibo account which says, “Do not call Redmi X, there will be a better name. Good night”.

Recently three screen protectors have surfaced online showing the specifications of Redmi Flagship device. However, the name of the device still remains a mystery as three pictures have popped up, all with the same list of specifications but different names, Redmi K20 Pro, Redmi P20 Pro, and Redmi X20 Pro. But, we think these images might be photo-shopped. We can’t verify its authenticity. So take this with a pinch of salt. 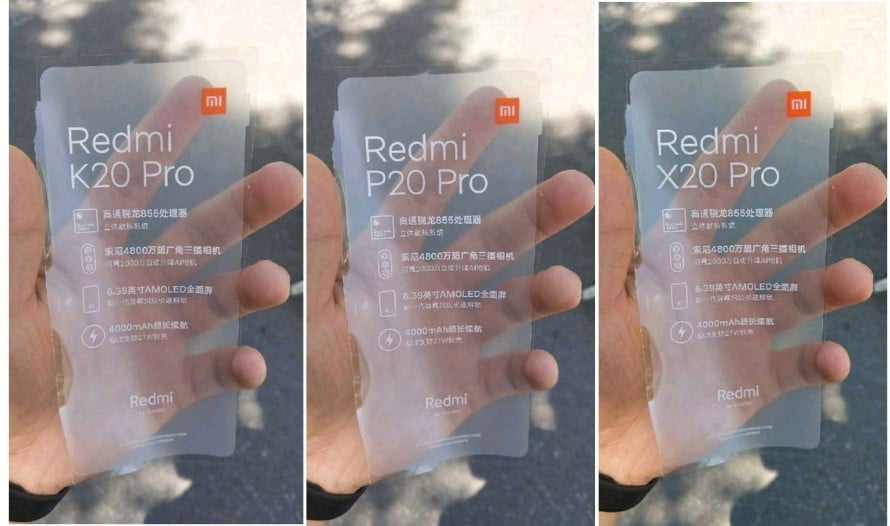 As far as the similar specifications are concerned, the list reads a 6.39 AMOLED display with the powerful Snapdragon 855 under the hood. A 20 MP pop-up selfie camera and triple-lens setup at the rear with a 48 MP primary sensor. All this is powered by a huge 4000 mAh battery. Now the authenticity of the pictures is not certain so even the information given might not be true to the whole extent.

Now as per some Weibo account post from the general manager, a few things about this upcoming device are now certain. The device will come with a wide-angle lens setup, a 3.5 mm headphone jack and also support for NFC.

There is also a video teaser on the company’s website by the tagline “flagship” and a picture of a device with a pop-up selfie camera. So one can expect a bezel-free display on this new Redmi.

Now as far as the launch date is concerned, reports have come in about a 13th May launch in China alongside “One more thing”. As of now, there are no details about the second product. Some rumours also suggest that the Redmi Flagship will come as Poco F2 in India. A launch date so close to the Oneplus 7 and Oneplus 7 Pro launch date seems like a pre-planned move from Redmi.