The size of this Android Nougat Based Update is about 48MB

OnePlus’s latest flagship the OnePlus 5T has just beat Apple iPhone X in terms of speed which points to the fact that the OnePlus 5T might just be the fastest smartphone on the planet. On top of it, OnePlus has already started rolling out a software update for it. The device has received OxygenOS 4.7.2 as its first major software update.

This new over the air (OTA) update is about 48 MB in size and is based on Android Nougat, not Android Oreo. This new update brings in several optimizations to fingerprint unlocking and face unlock features along with other performance enhancements. This upgrade will also be improving the accuracy of off-screen gestures to enhance the experience. 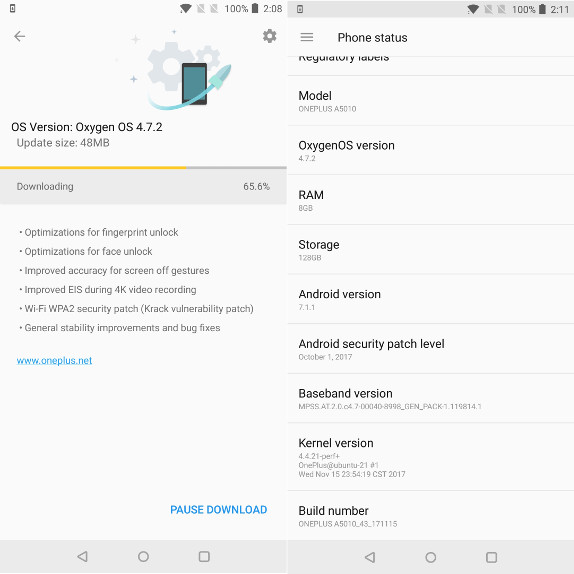 There is no OIS (optical image stabilisation) on the OnePlus5 as well as the OnePlus 5T. So the company has added an improves EIS (electronic image stabilisation) while recording 4K video. The update also contains a security patch for the infamous Wi-Fi WPA2 KRACK vulnerability. OnePlus has already released the security patch for the OnePlus 5 earlier this month. Additionally, the latest OxygenOS 4.7.2 update improves the stability and fixes small bugs.

The Oxygen OS 4.7.2 is the first major update for the OnePlus 5T since its launch on November 16. Also according to OnePlus co-founder Carl Pei, the company is working on updates for the OnePlus 5T camera. He also revealed the OnePlus 5T was their fastest selling product till date. The device has one of the best cameras which can even compete with the Google Pixel 2. The company will be looking to improve low light photography, selfies and colour production. The final update will likely to be released in early December.

As for the latest OxygenOS 4.7.2 update, the device has rolled out publicly however it may take some depending on which country you are in. You can check the availability by going to Settings > System updates. Users are advised to back up their data before updating.

The OnePlus 5T costs Rs 32,999 for the 6 GB RAM + 64 GB storage version and Rs 37,000 for the 8GB  RAM + 128 GB storage variant. Both will go on open sale on Amazon from November 28. There are also a couple of launch offers like Rs 1,500 instant discount on transactions done using HDFC credit and debit cards. Idea is offering 1008 GB data for 18 months, and users can also sign in to Kindle app to get Rs 500 promotion credit for Kindle eBooks. There is also another offer giving one-year complimentary Zomato Gold Membership, Rs 250 as Amazon Pay balance to users who stream Prime video app, and free 12-month Damage Insurance by Servify.