Samsung’s One UI 5 skin is based on Android 13

Samsung has already rolled out One UI 4.0/ One UI 4.1, which is based on Android 12, to a variety of devices. Google’s I/O 2022 event took place on May 11, at which they unveiled the all-new Android 13 operating system. One UI 5.0 is Samsung’s upcoming custom skin based on Android 13. Samsung has also announced its new update policy, which includes four major Android upgrades and five years of security patches for select devices. Now, let’s take a closer look at the One UI 5 Eligible Devices and Release Date.

November 11: Samsung has released the stable One UI 5 update for the Galaxy Z Flip 4 and Galaxy Z Fold 4 in the US. The update is rolling out to unlocked variants for now. Currently, the stable build is available for those users who enrolled in the beta program.

November 9: Samsung is rapidly expanding the One UI 5 stable rollout list. Now we have the first mid-ranger Galaxy A53 on the list. The update carries build number A536BXXU4BVJG, bringing October 2022 security update. The stable build for A53 is now available in the Netherlands and will rollout out shortly in all European countries.

November 7: Galaxy Note 20 series, Galaxy S20 Series, and Galaxy S21 series are getting stable One UI 5 update in some parts of Europe.

November 5: Samsung may release One UI 5 for Galaxy M33 and A52s in December 2022. Test builds are now surfacing online.

October 31: Samsung is now seeding One UI 5 firmware update with the S90xU1UEU2BVJA version to Galaxy S22 users in the US. The carrier-unlocked versions of Galaxy S22, S22+ and S22 Ultra are eligible for the update. The latest firmware also adds the October security patch.

October 29: Samsung will likely release One UI 5 for Galaxy S21 FE in November 2022. Test builds are already surfacing on the web.

October 26: Samsung shared the One UI 5 stable release roadmap for Galaxy devices through its Members app for South Korea. 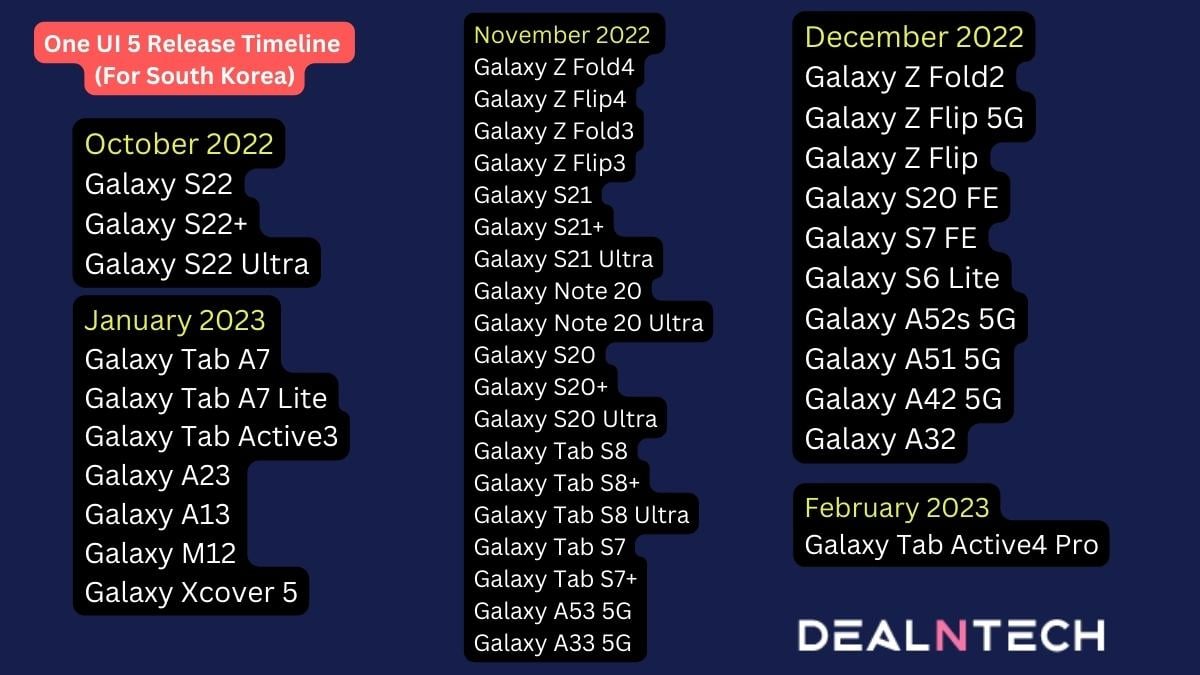 October 24: After months of beta testing, Samsung Galaxy S22, S22+, and S22 Ultra owners have started getting a stable build of One UI 5 in Europe and Asia. The update comes with the firmware version S908BXXU2BVJA/ S908EXXU2BVJA. Interested users can head to Settings > Software Update> Tap on Download/Install. The stable build is available for both Exynos and Snapdragon variants of the S22 lineup.

October 20: If you own a Samsung Galaxy S21 model in India, you can signup for the third One UI 5 beta program through the Samsung Members app to test the early build. In addition, Samsung has also opened up the beta program for Galaxy Z Fold 2 users.

October 18: Samsung Galaxy Z Fold 4 and Galaxy Z Flip 4 are getting the One UI 5 beta in the US and other regions. The fifth beta build is also available for the Galaxy S22, Galaxy S22+, and Galaxy S22 Ultra in China. The firmware version ends with ZVJA.

October 14: Samsung Galaxy Z Fold 3 and Flip 3 users in the US, India, Korea and UK can join the One UI 5 Beta program.

October 12: Galaxy Note 20 and Note 20 Ultra owners in the US can now apply for One UI 5 beta. It should be noted that only unlocked Galaxy Note 20 models are eligible in the United States.

October 10: Samsung is rolling out the second beta update of One UI 5 for the Galaxy A52 users in India. It comes with firmware version A525FXXU4ZVJ2.

October 7: One UI 5 beta 4 build is available on the Galaxy S22 series. It comes with a firmware version ending ZVJ2 and rolling out in the US, South Korea, Germany and India.

September 21: Samsung Galaxy S22 lineup in Europe has started receiving the third One UI 5.0 beta build based on Android 13. The same update will push to other markets by the end of this week. The new build improves the home screen return animation.

August 31: The Galaxy S21, S21+, and S21 Ultra owners can experience the One UI 5 skin by participating in the beta program through the Samsung Members app. The beta program is currently live in South Korea and the UK.

July 8: 9to5Google has been able to experience an early build of One UI 5. One UI 5 feature will likely include Revamped Notification Center, Copy/Paste Text from Images, Security and privacy hub, Stock Android-like One UI-themed permission pop-up, New Multitasking Gestures in the Labs section, Samsung Notes Collaborations and an improvement to animations.

June 8: As per Sammobile, One UI 5 will bring faster animation speed and improved UI design. It will release later this year alongside Android 13.

How to Join the One UI 5 Beta Program?

That’s it; go to the Settings app and navigate to the Software update section. Now download and install the latest build. You will now be able to experience Android 13-based One UI 5.0.

The stable One UI 5 build was released publicly on October 24, 2022. As of now, the Galaxy S22 Series has received the One UI 5 stable update. Later, the update will also be available on select Galaxy devices.

In general, Samsung releases a new major version of One UI once every year. One UI 4.0 was announced in November 2021, and One UI 4.1 was announced in February 2022. So the One UI 5 is expected to be announced sometime in the fourth quarter of 2022. However, because there has been no official word on this, the official announced date might change. Now let’s have a look at eligible devices.

So that was all for the eligible devices for the upcoming One UI 5 (Android 13) update. These are not officially eligible devices; hence, some devices may or may not get the update from the list.

While Apple introduced stackable widgets with iOS 14, Samsung is finally catching up with One UI 5. The early beta of One UI 5 has revealed that Samsung is indeed bringing this feature to its smartphones. The stackable widgets feature will let users stack widgets of the same size by dragging them on top of each other. Users can swipe right or left to navigate between different widgets. This feature is so helpful for those who want an uncluttered home screen. You can also edit the widgets and set them to rotate automatically.

Notifications have also seen some changes with One UI 5. The app icons are now much bigger and separated off to the left, making it easier to spot the different types of notifications on your phone. Plus, the ‘clear’ button is a little bigger and more distinct. Lastly, there are some changes to notification settings for different apps. Users can customize how they would like to receive incoming notifications from an app.

The split screen has been on Samsung phones for a while now. What’s new is that users can now enter the split screen mode by simply dragging an app from the recent menu. You can also hide the status and navigation bar to get more screen real estate.

With One UI 5, users can extract text from anywhere on the screen by taking a screenshot. This feature is built right into the Samsung gallery app. Tap on the ‘T’ icon and extract the text. The Samsung keyboard also lets users extract text from the real world.

Like the Google Pixel, Samsung One UI 5 also lets users have specific languages for different apps. This means that one can have the system language and all other apps presented in one language and a particular app in another.

Samsung introduced a ton of new camera changes with One UI 5. Users can now take pictures of anything with a phone number or link and can directly take action from the photo. Using the zoom is much smoother and getting back to the standard camera mode is just a tap away. The Food mode now supports the telephoto lens. Finally, users can add watermarks to their photos with details of phones, smartphone names, or any other text.

The permission request dialogue has been changed to the Android 13 one, which looks much more pleasant to the eyes.

In the accessibility settings, a new Magnifier feature allows you to magnify your surroundings using your phone’s rear camera. It is an excellent feature, even if you are not someone with a visual impairment.

Within the clock app, you can now add multiple timers. If you have an existing timer running and want to add a new one, tap on the ‘+’ icon and set a new timer.

Galaxy S23 Ultra vs iPhone 14 Pro Max: Which one is Better?

Is the Galaxy S23 Series Waterproof?