The phone looks like a normal T9 keypad device

Ever thought we can make use of Jio 4G in a feature phone, Sounds impossible but since the launch of Jio 4G we had to hear a lot about LYF Feature Phone at Rs.999 to support 4G VoLTE. Everyone would be thinking how would it be, What will does it support? Jio LYF Easy was rumoured which were having a touchscreen display. And it was planned to be the Cheapest phone to support 4G VoLTE. Really! It was an interesting concept to bring such phones which will be got support Reliance Jio 4G sim cards & which is worth to pay for them. Again after lots of rumours about Jio LYF Feature Phone, a leaked video about the phone has been shared on YouTube. The video has been shared on a popular Indian tech channel Technical Guruji by Gaurav Chaudhary.

Leaked video of the Phone shows exclusive hands onto the device. It doesn’t matter what will be the price of the cheapest 4G VoLTE phone, as it will be surely under Rs 1500. Fewer months back, Jio feature phone was rumoured, we’ve got the leaked image of that phone through a Twitter account. That phone had dedicated keys to the Jio suite apps. Remember? Though was no official announcement made from Mukesh Ambani (Chairman of Reliance Jio Info.) about the upcoming feature phone. 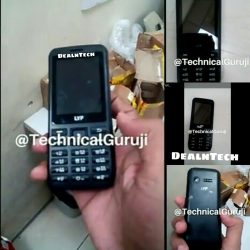 As seen in the leaked video, the phone looks like a normal T9 keypad phone. The phone may come under LYF branding as seen in the video. The phone has LYF logo front & rear sides. Jio LYF Feature Phone has a Rear VGA camera. The phone looks quite bulky in the size so we can expect it with a good battery backup. It has approximately 2.4 or 2.5-inch display.

We can expect this phone to be with certain plans from reliance, hope there will be a year of free services with this phone. This phone will work better as a secondary one if you don’t have a 4G device, or we can gift it to have who needs a phone for calling purpose only. Reliance will enable support for their Jio suite apps on this phone. So this phone will be unique & it does have support for Jio’s premium apps. So we can use Jio high-speed 4G internet in this feature phone.

Earlier a leaked image of Jio 4G VoLTE Phone had been surfaced online; we’ve been looking the same pic in the leaked video. But the video shared by Technical Guruji has the phone looking slightly different from that one. Earlier images have the dedicated keys on the menu, but this doesn’t have. Further, this phone is quite bulkier.

We can’t confirm if there is a Jio LYF Feature Phone exist even till now their’s no idea if the leaked video shared had the real one 4G VoLTE Phone. It could also be a fake arranged device intended for promotion only. Because in the video we didn’t saw any working of that device. And the video doesn’t confirm any support to 4G VoLTE. So we need to wait for more information. If there will be any official update about this LYF feature phone, we’ll add that to this article. I suggest you not to book the phone anywhere till the official update as for now there doesn’t exist any Jio LYF Feature Phone Booking else you may get scammed.

A tech freak who settles for none other than Latest Technology. He works hard to bring you the best analysis, updates, and reports on all things Android. He also writes interesting content like best phones for the website occasionally. Email: [email protected]

Jio Book Laptop: Everything You Need to Know