The smartphone sports a QWERTY keypad and dual cameras

BlackBerry Mobile today announced in their official Twitter account that it would be launching the BlackBerry KEY2  next month. The image contains the tag “AN ICON REBORN” along with the venue, date and time. The smartphone will succeed the last year’s BlackBerry KeyOne which managed to grab eyes with its keyboard design but was let down by performance issues.

This image clears previous confusion about the name of the smartphone which ranged from KEYone (2018) to KEYtwo. The launch event will be held in New York on June 7 from 10 AM. The tweet didn’t reveal any picture or any details about the smartphone.

The tagline “AN ICON REBORN” may be the hint to the fact that the company will take a modern approach in designing the smartphone. The smartphone will not only be up to date with the latest hardware but software as well.

The smartphone appeared last month in the Chinese mobile certification website TENAA with codename “Athena’ revealing its design aspects. From the image, the smartphone didn’t have the BlackBerry logo on the spacebar and had a rubberised texture on the back. The power button and the volume rocker are placed on the right side. The smartphone seems to feature dual camera setup on the back stacked in a horizontal position the upper left corner. The 3.5 mm headphone jack and a USB type-C port can be clearly seen.

Currently, there is no more information regarding the specs, price or availability of the smartphone in other markets. 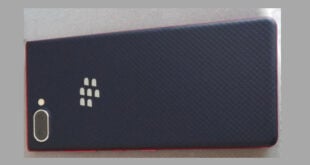