Peoples are going crazy to get the Jio Phone after its announcement. So, now there are several companies which are offering 4G VoLTE feature phones at a reasonable price. The race was started by Jio Phone, and now Intex, Lava and even more competitors are taking part in it. So, in this article, we are going to find the best 4G Mobile VoLTE feature phone for you.

Currently, there are three manufacturers of 4G VoLTE feature phone, Jio, Intex and Lava. But reportedly more companies are going to enter in this market segment very soon. The demand is already huge because normal users, as well as smartphone users, are also going to buy these feature phones. Smartphone users are buying these phones as a secondary device.

Along with these, all of these 4G VoLTE feature phones will come with special data and call offers from telecom operators. Like Jio has unveiled Jio Prime Rs 153 plan where Jio Phone users will get 0.5GB data per day along with unlimited voice calling and SMS. Other company’s feature phones are also coming with bundled data plans from different telecom operators. On the other side, major telcos like Bharti Airtel and Idea is also trying to launch their own or partnered 4G VoLTE feature phones to compete with Jio Phone. Only Jio Phone is effectively free of cost. Users just have to deposit Rs 1500 of the refundable amount to get the phone, and the security money will be given back to the users after three years from the date of purchase. 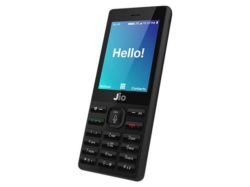 Though Jio Phone full specifications are not revealed yet, some of its features are leaked online. Reportedly, Jio Phone will contain a 2.4 inches QVGA display along with Qualcomm 205 or Spreadtrum SoC chipset. According to the rumour, Jio Phone will come with 512MB of random access memory (RAM) and 4GB of internal memory. Storage is expandable up to 32GB via MicroSD card.

It will support 4G VoLTE network, and a 2MP camera is mounted to its back. 2000mAh Li-ion battery powers it. Jio Phone runs on Kai OS and will come with NFC payment support, flashlight, Wi-Fi, digital voice assistant, etc. Apps like JioPlay, Jio Cinema, Jio Music, etc will be preloaded with this phone.

In a recent report, it is said that a device called Jio Phone Tv cable will be launched in the market which can be used to connect Jio Phone with any television and users can enjoy live streaming with Jio 4G internet in the Tv using Jio Phone. But, it is not clear that if that device comes with the Jio Phone or users will have to buy it separately.

This is another phone in this lineup. A well known Indian mobile manufacturer Intex has entered in this market segment with its 4G feature phone called Intex Turbo Plus. The phone comes with same 2.4 inches QVGA display along with Spreadtrum dual-core processor. It will also include 512MB of RAM and 4GB of internal memory which is expandable up to 32GB via MicroSD card.

This 4G volte feature phone also runs on Kai operating system and features a 2MP back camera. Intex Turbo Plus also comes with 2,000mAh of battery and 4G VoLTE support. You will find some preloaded apps on Intex Turbo Plus 4G. Unlike Jio Phone, users can use any 4G Sim card on this phone. So there are no restrictions on telecom operator. But the phone is not effectively free.

This is another leading brand in India which has launched its 4G VoLTE feature phone. Reportedly the phone comes with a 2.4 inches QVGA display along with 1.3GHz quad-core processor. The name of the processor manufacturer is still unknown. Lava Connect M1 runs on 512 MB of RAM and 4GB of ROM. Also, you can expand the storage up to 32GB via MicroSD card.

Like other 4G VoLTE feature phones, a torchlight is also attached to it. But the battery capacity of this feature phone is a little bit lower than the other two phones. A 1750mAh Li-ion removable battery powers Lava 4G Connect M1. The feature phone also supports 4G VoLTE connectivity, Wi-Fi, single SIM (any 4G sim can be used), some pre-loaded apps like Facebook, Whatsapp, etc.

Among these three 4G VoLTE feature phones, Jio Phone is the best. It is best because the phone comes with all the feature which can be spotted in the other two feature phones. But it comes with the bundled data plans of Reliance Jio which are already the cheapest 4G data plans available in the market. The only problem with this phone is you can not use other telecom operator’s Sim card in it. But after all this phone is effectively free of cost. If you can return the phone after three years of use, you will get a full refund of the phone which is Rs 1500. As of now, no other manufacturers are doing this. But, finally, the choice is yours. Get one which meets all of your requirements.

Hope you liked this article on the best 4G mobile in India under 2000. But other telecom operators like Airtel and Idea is also trying to make and launch their feature phone to beat Reliance Jio. Reportedly, Bharti Airtel is looking for partnering manufacturers to offer bundled data plans which will be cheap. So, just let’s see what happens, and we will update this article as soon as any new 4G VoLTE feature phone enters in this race. Stay tuned with us and do not forget to comment which 4G VoLTE supported feature phone you liked most from this list.