7 Reasons Why You Should Buy Honor 7X Smartphone

Honor targeted this smartphone to consumers with keeping price in mind

Huawei sub-brand Honor launched their Honor 7X in China two months ago. Today the device comes to India and will be available via Amazon India. Honor’s Global President, George Zhao previously said: “We will launch Honor 7X in December at such a price that it will have no competitor in that segment”. This mid-range smartphone is packed with drooling features at an affordable price. We will be looking at 7 reasons why you should buy Honor 7X smartphone.

The display is the first thing we look at a smartphone and Honor 7X doesn’t disappoint. The front has very minimum bezels sports a 5.93 inch Full HD + (1080 x 2160 px) edge to edge display with an 18:9 aspect ratio. The device is slim and light and fits in hand perfectly despite its large size. The display is vibrant and colourful, and the content looks very good in it.

Like the Honor 9i, the Honor 7X also sports a dual camera setup at its rear consisting a 16 MP primary camera and a 2 MP secondary camera. This dual camera setup comes with all the regular features like phase detection auto-focus and LED flash for capturing those popular bokeh images. The dual camera also assists in the portrait mode and includes new features such as gesture recognition to click photos. 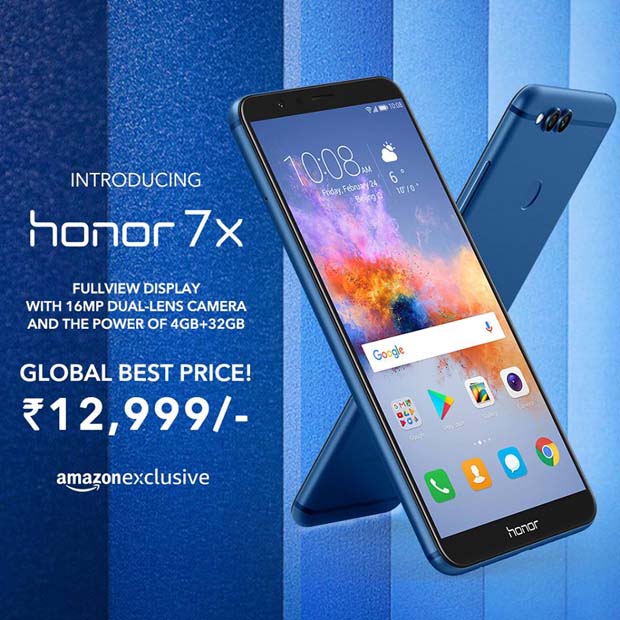 Portrait mode on the front camera

The Honor 7X sports a single 8 MP camera sensor on the rear but it offers bokeh or portrait mode which is available in two cameras. The single cam portrait mode is seen on high-end phones such as Google Pixel 2 and it rare on a device in this segment. There is also a wide aperture for clicking groupies easily.

Dual App is a nice feature which allows two different accounts for the same app. This comes very handy in keeping personal and work life separate. Honor 7X enables this feature with an app called App Twin that comes bundled with it.

At the global launch event of the Honor 7X, the device was dropped intentionally twice, and the phone handled that with ease. This shows the Huawei Honor has invested a good built quality in the smartphone. The smartphone is made of aluminium chassis and will be surviving normal drops even without an external cover.

The Honor 7X is backed by a 3340 mAh battery support for Huawei’s fast-charging SuperCharge tech. Honor had retained its old-school micro USB charging port instead of a USB Type C. The battery is very efficient and runs a day with moderate use of calling, gaming and video watching. With this smartphone, you don’t have to worry about battery drainage constantly.

True to Honor’s Global President, George Zhao words the device is priced so good that it doesn’t have a real competitor. The Honor 7X costs Rs 12,999 for the 32 GB variant and Rs 15,999 for the 64 GB variant. At this price, some may argue that Mi A1 and Moto G5S comes with similar specs, but the Honor 7X offers better specs with a larger display, bigger battery and even costs lesser than the two.